A short memory is essential for staying sane. That’s what also helps Mariano Rivera (although his leg injury has him out of action for the year) keep mowing ’em down in his 40s.

“If you’ve got depression, your brain will continually yak yak yak at you, mixing part truth and full lie to remind you of what a complete ne’er-do-well you really are. Kind of like a nagging spouse, except you can’t divorce your brain.”

“If I’m writing something while depressed, I am absolutely sure it is going to suck. Really really bad. But here’s a funny thing: Often when I look at the work later, I can’t tell much difference … it will take me longer to get motivated and focused enough to write the thing, but other than that I really can’t tell.”

As posted in Hubpages. Check it out.

I wrote this about a co-worker of mine, because it is suspected he really does hold some valuable life secrets without knowing it. Or caring. As reported in Hubpages:

“These days velocity trumps size and quality, and the whole objective to living seems to be just hanging on instead of winning — or even finishing — the race. You merely try to cope. But someone with Alan’s mindset seems to cope better than most. As I once said with tongue firmly implanted in cheek, Alan holds the secret to life. We even have a key phrase around the shop: ‘What Would Alan Do?’ “

In a world where the news seems to get worse and worse, there’s finally something uplifting in the headlines: Chocolate can relieve stress.

According to psychcentral.com writer Rick Nauert PhD, chocolate does seem to help the body cope with stress, and helps to correct any biochemical imbalances related to stress.

H’mm … Prozac in one hand. Chocolate in the other. Which one to take? Man, you’ve got to be kidding.

In a clinical trial, investigators found that eating about an ounce and a half of dark chocolate a day for two weeks reduced levels of stress hormones in the bodies of people feeling highly stressed.

I wouldn’t have minded being a lab rat for this test.

OK. Who cares about what the clinical tests say? I could have done these tests myself and saved the scientific community a ton of money. Maybe I can’t tell these scientists the chemical breakdown of how chocolate works on mind and body, but I can tell them the world would really suck without it.

Sunil Kochhar and colleagues note growing scientific evidence that antioxidants and other beneficial substances in dark chocolate may reduce risk factors for heart disease and other physical conditions.

That’s the buzzword in nutritional circles these days: Antioxidants. That’s the mystery stuff you find in some food that, if it doesn’t cure all your ills, it helps to make the body more resistant to all kinds of illnesses. Fortunately, you’ll find a good dose of antioxidants in all my favorite things:

Sweet tea (known in these parts as “Southern crack”).

Bring it on. And while you’re about it, fire all those viruses at me. I’ll shed them like Superman does with bullets.

And then there’s this:

Studies also suggest that chocolate may ease emotional stress. Until now, however, there was little evidence from research in humans on exactly how chocolate might have those stress-busting effects.

Ahh, the mystique of chocolate … Di, a blogger who writes about her experiences in the love wars, will tell you about it:

I remember getting a book years ago for chocoholics like myself. In one chapter there was scientific evidence cited to show that the human brain experienced similar chemical reactions when they “fell in love” and when they ate chocolate. This led the scientists to the conclusion that people eat chocolate as a substitute for love. However, chocoholics like myself know that the opposite it true – that people fall in love as a substitute for chocolate …

Now, even though I’m male (you know the Mars/Venus dichotomy), this still makes sense to me. A whole lot of sense. We guys may not talk about it, but we’ve got to have our chocolate too.

Another rumor I’d heard years ago was that some components of chocolate were structurally similar to THC, the active ingredient in marijuana. Now, that sounds like the makings of good urban legend, but aq dose of chocolate does seem to make the world a better, more peaceful place. Now, it’s been many years (actually decades) since I’ve smoked one of those left-handed cigarettes, and I’ve never felt like I missed it. Who needs it when you’ve got chocolate?

I don’t think chocolate will give you the munchies, but writing about it sure does. I think there’s a last piece of cake in the fridge. I’m after it. 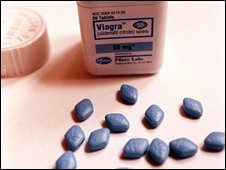 A new version of Viagra appears to be coming down the pike — allegedly it’ll be in a cream.
This is from the BBC:
A cream allowing erectile dysfunction drugs to be applied directly could make them safer, scientists say …
[Insert bad joke here.]
This may be a real good thing for those who are on Prozac, as the 10-mg tablets look a lot like the Viagra pill (I had to go online to see this for myself, though I know what Prozac looks like). See, Viagra is mentioned as the best way to mitigate one of Prozac’s most notorious side effects. You don’t want a medical mixup at a most crucial moment. I’ve attempted this … even down to all-night sessions of FreeCiv, or a few mindless hours of FreeCell. Haven’t tried Bejeweled (which this article features), though.

And, you’ve got to admit, the video or computer games do have a real tranquilizing effect … like I can’t remember why I was so depressed. Hours melt away (I’m still not sure whether this is a good thing). It’s a real good way to isolate.

Gail Nichols has suffered from depression for years. When the 49-year-old resident of St. Marys, Kan., cannot sleep, she falls back on a form of entertainment that is gaining increasing credibility as a medical intervention: video games … Nichols said she discovered the mental health benefits of video games some years ago during a particularly bad spell of depression. She had just started playing a game called Bejeweled, which requires players to move gems into rows based on their color. When she could not get to sleep one night and was tormented by mental pain, she said, she turned on the computer and played the game for hours … “In the day, you can find someone to talk to,” Nichols said. “Games are a big help in getting through to the next morning.”

Here’s how it works:

The researcher hypothesized that one reason for the apparent mental health benefits of video games is that many people in Western countries find it impossible to switch off; they are always alert and stressed out. When those Type A people try to relax, they get bored because they have come to require a certain level of stressful arousal. Playing certain video games, Russoniello said, offers just enough mental challenge to keep such people occupied while putting them into a state of relative mindlessness …

OK. I’ve mentioned this before. A good long bike ride does wonders for me; it’s like Prozac without the side effects. Some carefully-selected songs on the mp3 player help a lot, too.

But this is still interesting, and if things get particularly ugly I can download Bejeweled onto my cell phone — but I have a solitaire game on there already.

Go to The Creativity Wars explores the creative side and why it's forgotten.

Recommended reading, including my own

We’ve been there before